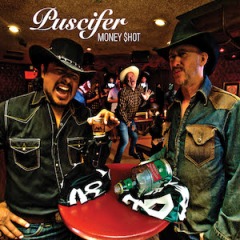 All of us who know Frontman (or should I say, Hide-in-the-Backman) Maynard James Keenan will know of the diverse delights in which he delivers. From his first band Green Jelly with a comical/garage edge, to the brilliance that is Tool and A Perfect Circle, his musical endeavours put us on the path of Puscifer. Maynard has brought some different sounds to the group, being more electronic, fun and vibe. With yet another comical sense to it with their first album, V Is For Vagina, then moving onto the second album Conditions of My Parole which offers yet another feel, a more “mature” sound and lyrics. And now our newest gift, Money Shot. Released October 30 2015 under their own label, Puscifer Entertainment.

Let us start this with a quote from Maynard, “If you don’t live, you have nothing to write about.” So, let’s live… Vicariously… Through Puscifer… (Eh… Get the Tool reference?)

I never thought I would grow to like Puscifer, being so set in my ways with “Tool” and “APC”, but I was just a tad wrong. As different as the sound is, I still feel like there’s some form of nostalgia behind Maynard’s writing on these albums, and a dead set change in sound at the same time. Though, I have noticed some similarities to “APC” or “Tool” in “money shot”, as far as guitar, and vocals go. He even throws in some passionate, angry vocals in the single “money shot”, the heaviest song on the album with some slappy bass, and thrashy drums, I personally love it in comparison, but that doesn’t mean the rest isn’t simply great. I find myself drifting away with this album, in the best way.

This album is still on the spiritual, political, eye opening tip, with songs such as “Grand Canyon” explaining, just how small and insignificant we are when we place ourselves in the perspective of the grand scheme of things. “Once you embrace your nothingness, you can move forward to a positive end” says Maynard, as he explains his theory behind his lyrics, which is pretty well typical for Keenan, in his writing. He gives us a clear, yet cryptic message of how he perceives the world, the universe and more importantly, us crazy homo sapiens (how WE perceive and treat ourselves/the earth) which leads us to think, and feel for ourselves (as we should). I thoroughly enjoy listening to “Smoke And Mirrors”, it has a beautifully delayed guitar and effects. Mind you, there isn’t a lot going on in the song, musically or vocally, but it’s effects were long lasting. And I just LOVE the vocal harmonies, and melodies of both Maynard and Carina Round who has also worked on previous Puscifer albums. They add to the effect of the message, with catchy melodies, and eerie, soft, almost mystical vocals that make you want to sink into the music and live in it.

The whole album stood out to me in it’s diversity of sounds, tones, and moods, it was simply excellent on the first listen, and continues to greaten with the more I listen (in it’s entirety). There is so much atmospherical sound and feeling to this album, and the entire thing feels so much more thoughtful, and less comical than Puscifer in the past, with all tracks having some deep and meaningful thought behind them, regarding our current state as human beings, the disconnect we experience in our current societal influence of consumerism, disrespect, disregard to the preservation and care of nature, and self destruction. And regardless of the intentions in the lyrical creation, it has been interesting to view the perceptions of others engaging in the music and picking apart the meanings behind the music.

We have most of the same artists continuing on this album, and then some, with the band being made up of Maynard James Keenan (vocals), Mat Mitchell (Bass/Guitars/Keys/Banjo/Mandolin/Programming), Carina Round (Backing Vocals), Juliette Commagere (Keys), Jeff Friedl and Tim Alexander (Drums) and even Keenan’s son Devo Keenan on cello. So we have quite the collaboration happening here, which makes for much more of an interesting recipe, utilising many minds as one.

All in all, I found this to be one of the many great albums of 2015, and one of my favourites. And dare I say it, my favourite Puscifer album yet. And if you’re lucky enough to reside in America, they are currently touring. Check out the schedule, and treat yourself to the unbelievably talented art, that is Puscifer.