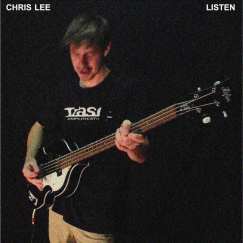 Chris Lee is an accomplished multi- instrumentalist, producer and audio engineer
spreading creation from his homemade recording studio within the suburbs of north Brisbane.

Growing up in a heavily musical family, Chris always knew that music was something he was deeply interested in. He began taking guitar lessons from his father at the tender age of 8, and has since transitioned between skilfully mastering guitar, bass and drums.

Upon finishing high school, Chris attended the SAE Institute Brisbane, where he graduated with a diploma of audio engineering.

After scoring national airplay on a range of songs from his debut self-titled EP in 2015, Chris now enlightens us with his newest single ‘Listen’.

‘Listen’ is synth-driven psych-pop at its finest. In his own words: “it was written during a time that I was stuck with a 6 day working week. It really drains a lot of energy out of you, and you begin to get so caught up in the stress that you start to feel like a cranky old man.

‘Listen’ sort of works as a friendly personal reminder that I’m still so young, and need to just to chill out instead of taking life’s annoying times so seriously”.